Ray tracing is a fascinating algorithm used for image synthesis. I have written a rudimentary ray tracer consisting of more then 5000 lines of code.
The video below shows it render a high resolution triangle mesh representation of the Stanford dragon:

Fast implementations depend on binary trees to reduce the number of required ray triangle intersection computations. These trees are quite beautiful to look at. In a nutshell such trees are generated by splitting a bounding box which contains the object in two recursively again and again. The video below visualizes such a tree:

The same algorithm can also be used for mathematical plotting purposes. Below you can see renderings of a Julia fractal in two and three dimensions, generated using the same ray tracing code: 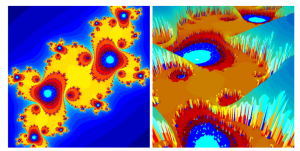 The source code is freely available at:
Github